FRIERSCHLOOTERSCHWITZ
Dance theatre for the very youngest from 3 years of age ...

Standing in the corner shivering, heat that knocks you over, a bright red head with blue lips, chattering your teeth from the cold or melting away in the shade: Temperatures have an immediate effect on the body and change movements. And there are parallels between temperature and temperament: excited, fast, warm, calm, dark, cold, fleeting and mild. Two performers give themselves over to the elemental phenomena of the ups and downs of temperatures. They run hot and keep a cool head. FrierSchlotterSchwitz will be a test for the ensemble of the JUNGEN STAATSTHEATER. For the first time, the actors will have to rely entirely on their bodies and explore dance as a means of expression. The premiere of “FRIERSCHLOTTERSCHWITZ” took place in 2013 at the Staatstheater Karlsruhe.

[…] This is a lot of fun, because getting dressed and undressed is an important topic for small children. Usually it is no fun for them, but as cheerfully and agilely as it is presented here, that can change. The children cheer when the two big stage boys push each other wantonly, jump on each other’s backs, make wide movements or curl up together. In between, they bounce satirising each other and sing hilarious rhymes. […] (Die Rheinpfalz, 25.10.2017) 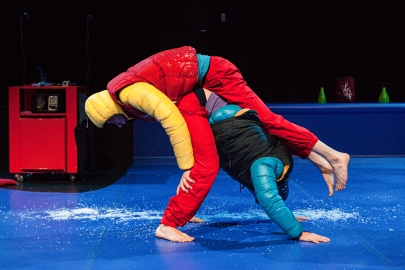